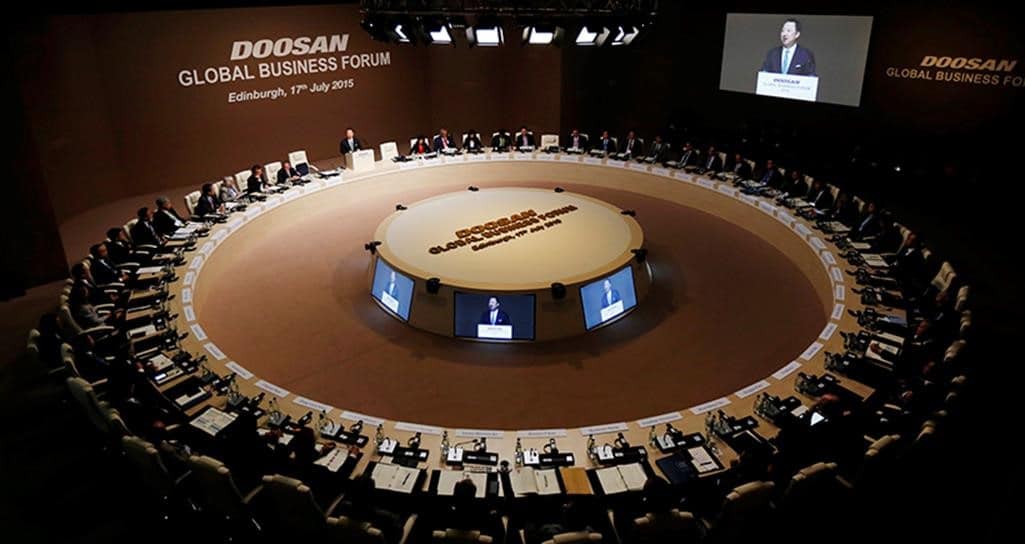 Prominent speakers included Joan Ogden, Professor at the University of California, Davis, and a specialist in the economics of hydrogen and alternative energy technology; and Gita Gopinath, Professor of Economics at Harvard University. Each presentation was followed by a Q&A session with more than 50 guests, comprising representatives of preeminent Infrastructure Support Business companies, leaders in the energy industry and CEOs of world-class financial groups from around the world.

In his opening and closing remarks, while citing an Indian proverb “We cannot change the direction of the wind, but we can adjust the sails,” and John F. Kennedy’s famous saying “Efforts and courage are not enough without purpose and direction”, Doosan Group Chairman Yongmaan Park expressed his hope that “this discussion help us identify what is ahead of us and how we should respond to the changing environment.”

In the first session on the Global Business Environment, Gene Sperling, Director of the NEC and former Assistant to the President for Economic Policy, shared his views on the short- and long-term economic trends of the United States and other developed nations.

Justin Yifu Lin, former Senior Vice President of the World Bank and influential policy specialist on China, offered insightful perspectives on the current status and future trends of the Chinese economy, pointing out the reasons for China’s slower growth, and internal and external variables that can affect China’s future economy.

In the following session, Joan Ogden, Professor at the University of California, Davis, offered her insights into the transformative rise of the hydrogen economy*, predicting a growing share of hydrogen fuel cell power in the future energy mix and overall industrial prospects.

This year’s Forum featured a special session on the Indian economy. Shri Rajiv Mehrishi, Secretary of the Ministry of Finance, India, addressed the topic of India’s economic growth and economic policy reforms. Amitabh Kant, Secretary of the Ministry of Commerce and Industry, India, who spearheads the “Make in India” manufacturing initiatives, explained the program’s key points, including infrastructure construction plans, smart city projects and energy policies.

Not far from the forum venue, the Open Championship was held on the Old Course at St. Andrews from July 16 to 19. Doosan is an official patron of the event.

*”Hydrogen economy” refers to the potential for hydrogen to replace fossil fuels as the main source of energy supplied and consumed in the future.